A common misconception about p-values

Oakes (1986) asked the following question to students and senior scientists:

You have a p-value of .01. Is the following statement true, or false?
You know, if you decide to reject the null hypothesis, the probability that you are making the wrong decision.

The answer is “false” (you will learn why it’s false below). But 86% of all professors and lecturers in the sample who were teaching statistics (!) answered this question erroneously with “true”. Gigerenzer, Kraus, and Vitouch replicated this result in 2000 in a German sample (here, the “statistics lecturer” category had 73% wrong). Hence, it is a wide-spread error to confuse the p-value with the false discovery rate.

To answer the question “What’s the probability that a significant p-value indicates a true effect?”, we have to look at the positive predictive value (PPV) of a significant p-value. The PPV indicates the proportion of significant p-values which indicate a real effect amongst all significant p-values. Put in other words: Given that a p-value is significant: What is the probability (in a frequentist sense) that it stems from a real effect?
(The false discovery rate simply is 1-PPV: the probability that a significant p-value stems from a population with null effect).
That is, we are interested in a conditional probability Prob(effect is real | p-value is significant).
Inspired by Colquhoun (2014) one can visualize this conditional probability in the form of a tree-diagram (see below). Let’s assume, we carry out 1000 experiments for 1000 different research questions. We now have to make a couple of prior assumptions (which you can make differently in the app we provide below). For now, we assume that 30% of all studies have a real effect and the statistical test used has a power of 35% with an α level set to 5%. That is of the 1000 experiments, 300 investigate a real effect, and 700 a null effect. Of the 300 true effects, 0.35*300 = 105 are detected, the remaining 195 effects are non-significant false-negatives. On the other branch of 700 null effects, 0.05*700 = 35 p-values are significant by chance (false positives) and 665 are non-significant (true negatives).
This path is visualized here (completely inspired by Colquhoun, 2014): 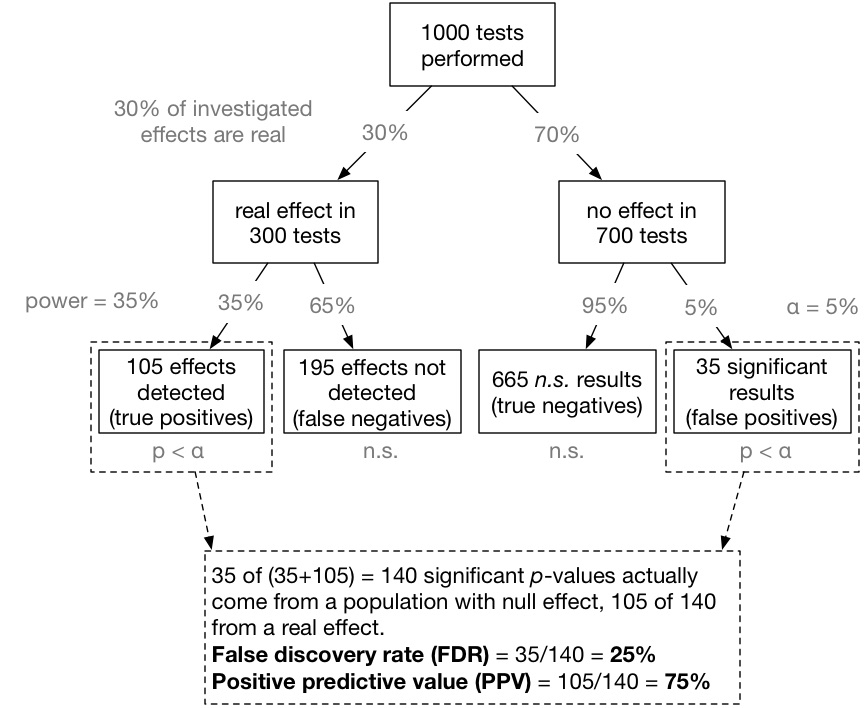 Together with Michael Zehetleitner I developed an interactive app that computes and visualizes these numbers. For the computations, you have to choose 4 parameters.

Let’s go through the settings!

Some of our investigated hypotheses are actually true, and some are false. As a first parameter, we have to estimate what proportion of our investigated hypotheses is actually true.
Now, what is a good setting for the a priori proportion of true hypotheses? It’s certainly not near 100% – in this case only trivial and obvious research questions would be investigated, which is obviously not the case. On the other hand, the rate can definitely drop close to zero. For example, in pharmaceutical drug development “only one in every 5,000 compounds that makes it through lead development to the stage of pre-clinical development becomes an approved drug” (Wikipedia). Here, only 0.02% of all investigated hypotheses are true.
Furthermore, the number depends on the field – some fields are highly speculative and risky (i.e., they have a low prior probability), some fields are more cumulative and work mostly on variations of established effects (i.e., in these fields a higher prior probability can be expected).
But given that many journals in psychology exert a selection pressure towards novel, surprising, and counter-intuitive results (which a priori have a low probability of being true), I guess that the proportion is typically lower than 50%. My personal grand average gut estimate is around 25%.
(Also see this comment and this reply for a discussion about this estimate).

That’s easy. The default α level usually is 5%, but you can play with the impact of stricter levels on the FDR!

The average power in psychology has been estimated at 35% (Bakker, van Dijk, & Wicherts, 2012). An median estimate for neuroscience is at only 21% (Button et al., 2013). Even worse, both estimates can be expected to be inflated, as they are based on the average published effect size, which almost certainly is overestimated due to the significance filter (Ioannidis, 2008). Hence, the average true power is most likely smaller. Let’s assume an estimate of 25%.

Finally, let’s add some realism to the computations. We know that researchers employ “researchers degrees of freedom”, aka. questionable research practices, to optimize their p-value, and to push a “nearly significant result” across the magic boundary. How many reported significant p-values would not have been significant without p-hacking? That is hard to tell, and probably also field dependent. Let’s assume that 15% of all studies are p-hacked, intentionally or unintentionally.
When these values are defined, the app computes the FDR and PPV and shows a visualization: 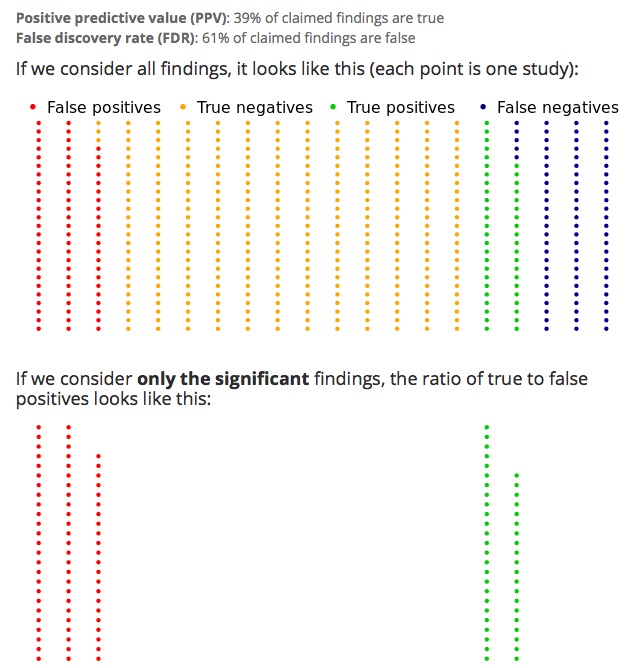 With these settings, only 39% of all significant studies are actually true!
Wait – what was the success rate of the Reproducibility Project: Psychology? 36% of replication projects found a significant effect in a direct replication attempt. Just a coincidence? Maybe. Maybe not.

The formulas to compute the FDR and PPV are based on Ioannidis (2005: “Why most published research findings are false” Note that the published PDF has an error in one formula; see comments at PLOS). A related, but different approach, was proposed by David Colquhoun in his paper “An investigation of the false discovery rate and the misinterpretation of p-values” [open access]. He asks: “How should one interpret the observation of, say,  p=0.047 in a single experiment?”. The Ioannidis approach implemented in the app, in contrast, asks: “What is the FDR in a set of studies with p <= .05 and a certain power, etc.?”. Both approaches make sense, but answer different questions.

Other resources about PPV and FDR of p-values

47 thoughts on “What’s the probability that a significant p-value indicates a true effect?”

This site uses Akismet to reduce spam. Learn how your comment data is processed.